Our commitment to New Brunswickers

We’re committed to serving our communities. As the COVID-19 situation in New Brunswick evolves, we’ll continue to adjust and expand our services accordingly, while respecting physical distancing and safety protocols.
Find out how we’re supporting our customers, and see which services remain suspended.
Our commitment to New Brunswickers

New Brunswickers can once again benefit from our residential, commercial and industrial energy efficiency programs. Our community outreach program remains on hold. We’ll continue to do our part to contain the spread of COVID-19 by respecting physical distancing and safety protocols.

Since June 2015, the Association of Professional Engineers and Geoscientists of New Brunswick (APEGNB) have had their Fredericton-based head office connected to the New Brunswick energy grid through NB Power’s Net Metering Program. The Association’s Council members were inspired to explore renewable energy generation options after hearing a presentation by NB Power executives in the summer of 2014.

The members of the Association heard NB Power President and CEO Gaëtan Thomas, PEng, speak about the future of NB Power, energy in New Brunswick and trends in the electric utility business. Mr. Thomas spoke about a future that embraces renewables, smart grids, smart user systems, distributed generation and net metering. These - and other methods - will help to reduce peak demand and provide more security and flexibility in the province’s electric utility business.

Motivated by this message, and recognizing the societal need to mitigate climate change and inspire confidence in renewable energy, the Association decided to take a ‘lead by example’ approach. As a regulatory body ensuring only qualified and licensed professionals practice engineering and geoscience in the province, it was important to their members that the Association provide social leadership as an early adopter of renewable energy.

“We are the people at the forefront of new technology—from its development to its implementation,” said past President Paul Campbell, PEng. “Recent advances in solar energy and electric utility management have made active solar power a cost-effective investment for property owners. The time was right for us, as New Brunswick’s technology innovators, to show community leadership in the fight to mitigate climate change and become an early adopter of renewable energy.”

Following the energy efficiency pyramid which prioritizes energy conservation and energy efficiency, followed by renewable energy, APEGNB underwent an energy audit to identify areas to reduce the building’s energy usage and improve its energy efficiency. The evaluation found that thanks to a high-performing building envelope and two high-efficiency air source heat pumps, the overall energy use of the building was low in comparison to other similar facilities. The energy audit recommended the installation of programmable thermostats, LED light fixtures, water-efficient faucets and solar panels. Adding a renewable energy source to the building was the natural next step to reducing greenhouse gas emissions and energy costs associated with the APEGNB building. 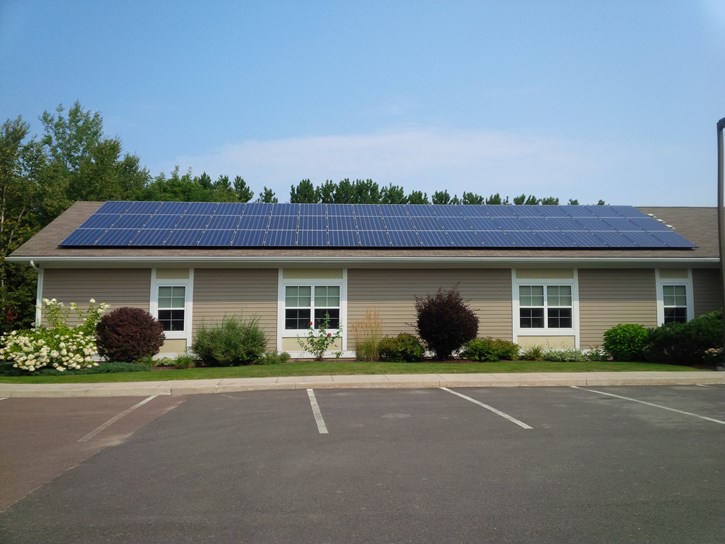 The Association’s members decided to install solar panels and participate in the net metering program. Within a few months, the plan to install sixty 250-Watt solar panels to generate a total capacity of 15 kilowatts was in place. By late June of 2015, the panels were capturing the power of the sun and converting into energy for use at the Association’s office or, when not needed at the office, putting energy on the NB Power grid for other New Brunswick customers.

The total energy production of the solar panels at the APEGNB site is anticipated to be 18,000-19,000 kWh per year. With an annual average energy use of 52,000 Kwh per year, the new solar installation will meet approximately 35% of the electricity needs of the APEGNB building.

Mr. Campbell emphasized that for the Association, success has already been realized through the awareness of renewables raised among the public.

“Many people and environmental groups have applauded our leadership in helping to mitigate climate change. Having the largest solar array in New Brunswick has certainly raised the profile of engineering and geoscience,” he added. “We can say that on the sunniest days, our solar array generates well over 100 kilowatt-hours of energy during a 24-hour period.”

Members of the public can see for themselves how much energy APEGNB’s solar panels generate each day by visiting www.apegnb.com. Read the full case study on APEGNB’s Net Metering project here.